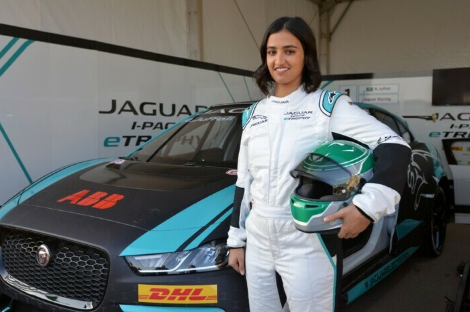 Riding the steering wheel on a sleek electric SUV, Reema Juffali was the first woman to compete in a men’s-only race in Saudi Arabia.

Saudi Arabia lifted its only ban on women driving in the world last June, as part of Prince Mohammed bin Salman’s policy to liberalize driving.

After the decades-long ban was lifted, Juffali, 27, became the first Saudi woman to race in the country and was considered by the organizers to be a “VIP” guest driver. She competed in the Jaguar I-Pace eTrophy electric car race in Diriyah, near the capital Riyadh, on November 22 and 23.

Prince Abdulaziz bin Turki al-Faisal, the Saudi Sports Minister, called this a “turning point” of the Islamic kingdom. “As a professional rider, Juffali will have thousands of people cheering for the competition,” he said.

Juffali first attended racing at the F4 Championship in England in April, just after a year of professional training. But Juffali has had a passion for speed racing since she was a teenager and enjoyed watching Formula One races.

She obtained a car driver’s license while studying abroad in the US and is now one of the few Saudi women who have a driving license in her home country, required to participate in professional races. Even in other countries, only a few Saudi women are racing professionally.

Juffali said she dreams of participating in a one-day race at Le Mans, France, one of the most prestigious and challenging tournaments in the world. In Riyadh, Juffali will compete on par with the professional riders last season.

However, Mr Mohammed also faces criticism surrounding the crackdown on dissidents. Many activists who campaigned for women’s driving rights were brought to trial last year. Some sources claim that they were tortured or sexually interrogated by interrogators, but Saudi officials denied this.

The driving reform has changed many Saudi women, helping them reduce their dependence on private drivers or relatives and seize the opportunity to participate in racing, a tournament that was previously only available to men.

Many people think that only cars with eye-catching colors will attract female drivers. However, the business revealed many “pit” like Chevrolet Camaro or Mustang convertibles are favored by women, despite the launch of the Cherry Red Mini Coopers to target female customers.

Some women are also practicing driving motorbikes at a vocational school in Riyadh, a scene that is still unusual in the oil nation.